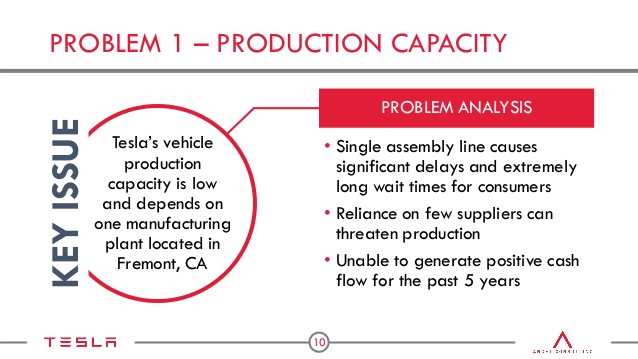 Tesla’s major issue is that, besides all the awards, zero missions, leadership and fancy cars, it still lacks a profit generating strategy. The investors are interested in making profit from selling cars, but this does not seem to be possible with the current marketing strategy of Tesla, as the investors are looking forward to a rewarding year in terms of profit (Weinstein, 2013).

Tesla Model 3 provided a ray of hope to the investors, but nevertheless, the marketing strategy did not change and the hopes were let down once more with low production, manufacturing costs and sales, which posed a serious threat to Tesla regarding financial crisis and a way out must be sought. Tesla, has a limited number of service centers and retailers, it’s a growing need for the company to increase the outreach to consumers. Tesla’s currently sales depend on its trust relationship build with the existing customers without the use of any advertisement campaign, marketing, franchise dealers etc. (Weinstein, 2013).

Over the period of time, Tesla has chosen not to sell their cars via franchises. The core belief is that owning the networks of sale and services, customers will be able to receive a more profound experience at the station, those with sophisticated taste do not fancy the traditional methods of selling cars such as via franchise distributors and service stores.

Tesla has around 18 service and sales stores in United States, which is a very low number, suitable for the model Tesla Roadster, because of its consumers who have exotic and premium choices when it comes to sports cars. But, this strategy is not useful for other mainstream car models offered by the company.

As Tesla is strategically partner with Mercedes, this partnership can be benefited from as Mercedes has a vast network of distributors around US, this platform can be utilized by Tesla for the promotion, showcasing and selling of their cars. This strategy can prove helpful, as Tesla will not have to locate financial resources to carry out this course of action, and without any advertisement campaign. After stabilizing their sales and company revenues, it can be suggested that Tesla expands its own distributors across the country (Tesla, 2011).

The advertisement campaign chose for selling of Tesla cars, was carefully selected considering all the options and financial expenditures involved including the outreach of ads to the potential market. The advertisement budget was entirely invested in magazine advertisement, the reason behind this selection is that, print media is most powerful way of increasing outreach.

Television was not chosen as a primary source of advertisement, although it has outreach to a large audience, but Tesla does not have the kind of resources to make a fair number of cars to be sold, alongside the fairly high rates of television advertisement during prime times, costs a lot of fortune.

Radio cannot be a preferred option because Tesla is a luxury brand, and currently does not have vast networks of dealers, services and sales promotions. Another reason for neglecting visual advertisement is that the brands offered by the company are not familiar to the public choice currently. Newspapers were also left out from the advertisement choice, because of the high costs and the fact that an ad appears in it one time, and its outreach is also limited to one person, so it is not wise to spend money without achieving the purpose (Crupi, 2011).

On the basis of issue analysis, the marketing strategy proposed is stated as:

“The marketing strategy should be revised and modern advertisement platforms need to be utilized to enhance customer relations, and new retail centers should be established to maximize sales and profit generation for the company.”

Tesla’s focus has always been on the high end consumers with high level of income, and their cars were not up for sale to mid-level earners, people who are environment conscious, minimum carbon footprint, wish for an easy-to-go, safe and reliable vehicle have been the focus of Tesla’s attention.

With this strategy the trend will shift and include people who are average income earners, the newly introduced model S, promotes the family concept, by being a seven seater car in which families can travel together with a safe and comfortable experience. Another, model which is in making also is integrating the family market, to gain more outreach and preference in consumers.

Tesla, has also introduced a new incentive based strategy, which enables customers to freely recharge their cars at the service stations, and federal tax credits (Hull, 2013).

The feature that makes Tesla stand out from other competitors is that it is a fully-electric car, which can be used for short road trips, or trips around town not at longer distances.

Environment becoming the center of all innovations and advancement in technologies, has raised awareness at such a level that citizens want to leave minimum carbon footprint and be more eco-friendly, Tesla is serving the purpose here, by making environment friendly cars (Park et al., 2014).

The primary psychographic target market of Tesla is people who are concerned about usage of natural resources as fuels for cars, and the economic value they cost, alongside, the desire to afford a posh car including safety and comfort at the same time.

The secondary market includes people who have good education levels, and are enthusiasts about getting a professional degree. Individuals who are enrolled at famous colleges and universities (Tesla, 2017).

The key benefits that Tesla customers prefer are mentioned below (DeBord, 2017):

With this strategy, Tesla will be able to gain profits and increase their revenues, which will eventually impress their investors, as their main concern is gaining profit from the cars, but as Tesla has been manufacturing a limited amount of cars for limited number of customers, but with this technology, market demand will increase for their cars and more people will be able to buy those cars especially those who are environmentally mindful.

Utilizing social platforms such as Twitter, Facebook, and Instagram etc. will help Tesla to minimize the gap between customer and producer, which is a unique experience for new purchasers. With this technique the message can directly reach to people who are more concerned about the brand, its products and services.

By establishing new showrooms and retailers in the country, more people will have access to the cars themselves, as they hear about the cars and their latest features and technological advancements, but they do not get to see them in real or test them due to the limited number of retailers. When this becomes a reality Tesla’s sales will increase instantly, because the technology and green services they are offering is need of the hour.

The marketing mix method is best able to explain the strategy and its activities, which are discussed below:

To provide people with assistance, knowledge and specific information about the brand following Ps of marketing can be utilized:

Tesla can utilize multiple platforms to communicate its statements and products with the customers. Reaching out to true customers has never been easier than this era, with advanced technology and every one owns a smartphone nowadays which means they have individual access to all the platforms and can stay up to date with the company its products and services. The company can utilize twitter hashtags when launching a new product, alongside, Facebook live can be utilized during promotional campaigns of new products, events and other activities about the company, products and services.

DeBord, M. (2017). Tesla is about to report earnings — but no one will talk about its biggest competitive advantage. Business Insider. Retrieved October 28, 2017, from http://www.businessinsider.com/tesla-supercharger-network-advantage-2017-2

The Economist. (2015). Death of a car salesman. The Economist. Retrieved October 28, 2017, from https://www.economist.com/news/business/21661656-no-one-much-likes-car-dealers-changing-system-will-be-hard-death-car-salesman