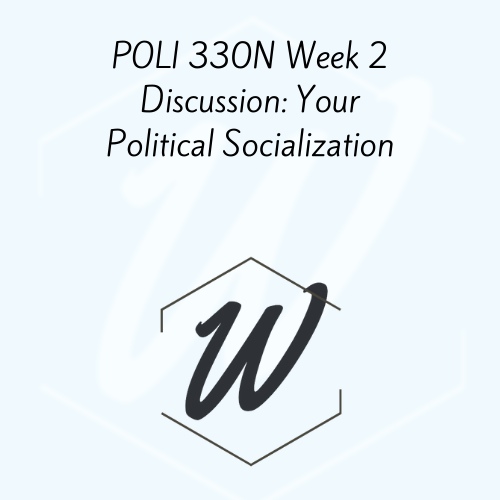 Political socialization begins young. Think about conversations around politics when you were in primary school (around age 10). Maybe there was a natural disaster in your area such as a hurricane and government response levels were critiqued. What were some of the ways you learned about the political establishment through family members and friends? How were you politically socialized as a child? Use evidence (cite sources) to support your response from assigned readings or online lessons, and at least one outside scholarly source.

On April 29th, 1992 there were riots in California due to the acquittal of the cops who were charged with the beating of Rodney King.  This is one of my earliest memories of my family having discussions about social injustice. There were a lot of racial political issues being televised around this time.  “Socialization is the process through which we acquire beliefs about the world around us; the media is a key way in which those ideas, values, and beliefs are communicated” (Whitman Cobb, 2020).    I was being exposed to the real world and what I had to look forward to.  My family would have all the kids watch what was going on and listen to the family discussions on how it could be one of us.  They were furious and disappointed with the system.  They were not surprised about the outcome because they believed the system was always against minorities.  I grew up believing that the system was never going to change and was not meant to protect us.  My feelings have not changed much as of today with everything that is going on with the Black Lives Movement not much has changed.

Even though my family doesn’t really believe in the system they always exercised their right to vote as I do as well. In college, I took different courses where we discussed political issues and I was exposed to many different views and opinions on the political system. “College-level courses in American history, civics, and political science encourage students to examine government institutions and processes” (Longley, 2021).  I learned to agree to disagree with other people’s perspectives and political beliefs.

Longley, Robert. (2021, March 3). What Is Political Socialization? Definition and Examples. Retrieved from https://www.thoughtco.com/political-socialization-5104843

from Week 2 Discussion: Your Political Socialization

I remember 9/11 vividly as I was going for breakfast in between classes and passed by an electronics store as they were showing the 2nd plane crashing into the building live. The media is everywhere and the news is practically shoved in our faces whether we want to see it or not.  Also, kids are witnessing things due to media coverage whether they are too young to process the information.  ‌ “Not only does the media influence public opinion by providing news, analysis, and a diversity of opinion, it exposes people to modern sociopolitical issues, such as drug abuse, abortion, and racial discrimination” (B. S. & Facebook, 2021).  We are exposed to everything that is happening to the world and are forced to process the information.  I think important conversations between children and their caregivers are important in order for them to understand what they hear or see unless the news will guide their opinions.