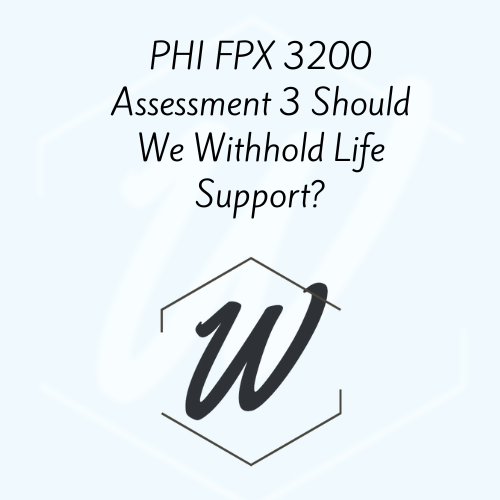 By Writink Services January 16, 2023 No Comments

Limiting life support, also known as euthanasia either passive or active, is more than just knowing what a persons end of life wishes are, typically speaking, do not resuscitate (DNR) or full code (CPR). It is common to know what a person’s wishes are, like if they would want to be intubated or have a feeding tube placed, passive euthanasia. For me, one aspect of this topic is a little more unfamiliar, that being, active euthanasia, which also is referred to as assisted suicide. Both passive and active euthanasia can bring up moral and ethical issues, we will discuss those issues in this paper.

Many that are in favor of life support can justifiably argue that it is morally wrong to just let someone die, whereas, those against life support can also justifiably argue that it is morally wrong to keep someone alive on machines. First, we will talk about some ethical issues that could arise from euthanasia. Some religions believe that suicide is wrong no matter the reason and if one was to commit suicide they will not be able to go to heaven, because suicide is an unforgivable sin (you cannot ask forgiveness after you are dead). Other religions believe there is no sin that is unforgivable and that loved ones can pray for forgiveness for you. Morally however, ending ones life to bring a peaceful end to suffering could potentially be the most humane and decent way to go.

Ross’ theory states that everyone should be treated equal and as long as all necessary steps were taken to prevent harm or injury that decisions could be justified. Every situation should be evaluated and treated fairly. Considering Ross’ theory one person should never harm another and beneficence is a limited duty (McCormick, 2021).

When studying the natural law of ethics we find that this law defends the central position that it is always morally wrong to intentionally kill another human no matter the reason. Natural law assumes that nature has a purpose and that purpose should be played out to its fullest and as humans we do not have the authority to interfere with that purpose (Paterson 2017).

The utilitarian approach might look into how life might affect the person and persons involved. Would life benefit the person or persons around them? Might everyone involved be able to live a better life not seeing their loved one suffer? What kind of live would this person have? What decision would bring the most happiness to the most people involved (Kitsera, 2017)?

In view of the Mr. Martinez case, he and his wife had made their decisions and wishes known in that he did not want extensive life saving measures. The ethical and moral issues come into play when we know that Mr. Martinez’s distress was induced by negligence or ‘a mistake’ by someone else. At the time of the oxygen discovery is made we would have to ask ourselves, would the distress have occurred either way? In knowing the Martinez’s wishes the health care team has to decide if it is not only ethical but legal to administer or withhold life support at this time. The patient in this case had an advanced directive, they had made their wishes known, and we would have to ask ourselves if we did everything that could medically be done now, would this patient have any quality of life. How would it be explained to the wife that he was getting better but when she left he crashed due to a medical mistake? How would the medical team be able to justify their decision to either provide or withhold treatments? The moral issue here is that the patient was getting better with treatment but went into respiratory failure due to not following the oxygen requirements. So how do we respect the patients’ autonomy? We have no way of knowing what the patient or family would want knowing that this was not just the disease process.

I would like to end by stressing that every patient is individual and every situation is different. We should always look at each situation differently, when it comes to ethical and moral decisions it is never ‘one size fits all’. Every person and situation is unique and should be respected as such. One thing is true and that is that we should respect others and their decisions. It is not up to us to judge others but to promote mutual respect.