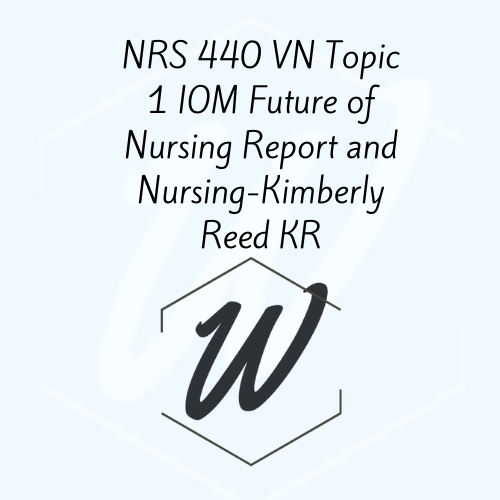 The Institute of Medicine’s (IOM) October 2010 report, The Future of Nursing: Leading Change, Advancing Health, is a comprehensive review of the nursing workforce. The IOM’s Robert Wood Johnson Foundation Initiative on the Future of Nursing seeks to present a vision for the future of nursing as part of wider efforts to reform the health-care system. The study’s recommendations focus on the important confluence of the health requirements of various, evolving patient groups across the lifespan and the nursing workforce’s activities (Altman et al., 2016). These suggestions are meant to help assist efforts to enhance the health of the American people by emphasizing the contributions nurses may make to care delivery.

To address challenges in health care practice, the Committee on The Robert Wood Johnson Foundation (RWJF) Initiative on the Future of Nursing at the Institute of Medicine (IOM) established a vision for a changed health care system (Sullivan, 2011). The IOM envisions a future in which “primary care and prevention are central drivers of the health care system, interprofessional collaboration and coordination are the norm, payment for health care services rewards value rather than volume of services, and quality care is provided at a price that is affordable for both individuals and communities” in their report titled “The Future of Nursing: Leading Change, Advancing Health.” (Battié , 2013)

The committee decided that further progress will need more focus and effort in critical areas. Continued work is required to remove scope-of-practice barriers; pathways to higher education must be strengthened, with a particular emphasis on increasing diversity; avenues for continuing competence must be strengthened; and data on a wide range of outcomes—from workforce education and makeup to the services nurses provide and the ways in which they lead—are required. A critical and overarching need is for the nursing community, including the Campaign, to build and expand alliances with non-nursing interests (Altman et al., 2016).

Four Key Massages of the report

According to this report, there are four key messages which has to be followed in general (Battié, 2013):

The New Mexico Action Coalition is a nurse-led consortium of community leaders whose purpose is to provide strategic direction to key stakeholders via collaboration and grassroots efforts to enhance healthcare delivery and promote wellness for New Mexicans. The New Mexico Action Coalition is working on initiatives to support the IOM recommendations in education, residencies, data, and practice, and it incorporates leadership, diversity, and multidisciplinary collaboration into its operations (Altman et al., 2016). The coalition will focus on developing and implementing a statewide nursing education plan, including a common curriculum and shared resources, as well as expanding its successful rural nurse residency program, developing a robust data infrastructure in collaboration with other health professions, and implementing the Aligning Forces for Quality Transforming Care at the Bedside principle (Giddens et al., 2015).

The New Jersey Action Coalition, which was established in 2011, has committed to lead an initiative in which nurses will be integrated and involved in existing community programs to promote healthier communities, well-being, and equity for New Jersey citizens. The New Jersey Action Coalition is made up of both nursing and non-nursing stakeholders, such as educators, legislative staff, and others. They are getting traction on a variety of initiatives based on the IOM report’s four core messages (Trends in Health Care: A Nursing Perspective, 2018). Two areas of focus include ensuring nurses lead and participate in projects to rethink and improve healthcare, as well as obtaining nurse appointments on NJ Health Information Exchanges boards. In addition, creating a public relations campaign and obtaining funding to put it into action. Communicating the value of ongoing education and leadership to nursing colleagues is also a top goal (Giddens et al., 2015).

Barriers to advancement of IOM Report

According to The Future of Nursing, although nurses and other practitioners are well skilled and capable to provide a range of services, but they are unable to do so due to impediments such as state laws, federal regulations, outmoded insurance reimbursement methods, and institutional procedures and culture. (Trends in Health Care: A Nursing Perspective, 2018) Time limitations or a lack of time; high patient workloads; inadequate staff; limited access to resources; and a lack of support from nurse management are among some of the hurdles that impede IOM progress.

The Future of Nursing makes a number of recommendations to ensure that nurses, as the largest segment of the health care profession, are prepared to satisfy the need for high-quality health care in a rapidly evolving and fundamentally altering delivery system. The study’s release in 2010 and the launch of the Campaign were timed to coincide with the ACA’s implementation of new care models to accommodate the large number of people who had previously been denied health insurance. These models stress collaboration, care coordination, and prevention—models that nurses can contribute a lot of knowledge and expertise to.