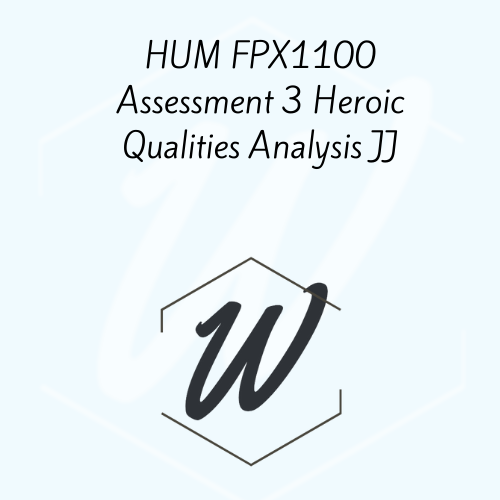 Directions: Use this template to complete your Heroic Qualities Analysis assessment.

I have selected the first artifact from the Exploring Cultures. It is the Biblical Story of “David and Goliath”. 1 Samuel 17 contains the tale of David’s battle with Goliath. The Israelites were preparing for a fight with the Philistines, with a valley between the two armies, each of which was stationed atop a mountain. Goliath, the Philistine champion, was a nine-foot-tall behemoth who wore armor and wielded a massive spear. The Philistines would win if Goliath defeated the Israelite champion, while the Israelites would win if the Israelite champion defeated Goliath. But the young shepherd-boy David accepted the challenge, going out to meet Goliath with just his staff, a sling, and five smooth stones he picked from a nearby creek and placed in his shepherd’s bag. Goliath cursed David, summoning his gods against the kid, but David responded that his God, the Lord, would help David defeat Goliath and grant the Israelites a triumph over the Philistines. Goliath became enraged by these statements and charged towards the tiny lad. At that point, David slung a stone at his opponent with his sling. The stone smacked Goliath in the forehead, and the Philistine collapsed face-down on the earth, stone dead (as it were). The Philistines fled the battle, and David seized Goliath’s armor before delivering Goliath’s head to Jerusalem. When the king inquired about his identity, David replied, “I am the son of your servant Jesse the Bethlehemite.” David was given a position in Saul’s court as a reward.

David understood that size does not matter; what counts are Spirit, Strength of character, and Dedication. The culture represented by the artifact emphasizes the value of bravery, heroic thought, and dedication. You may apply the same approach and degree of thought to your life and the issues you face. Think greater than the problem, be bigger than the hurdle, and behave as if not failing is impossible.

David had courage in the artifact because God had saved him from harm several times in the past. He was certain that God would deliver him in the face of adversity. David fought Goliath with a slingshot out of faith, and God granted him victory. This will help me in better understanding of the cultures represented in the artifacts. All the artifacts are about the heroic qualities of ordinary people which made them heroes and they become immortal in history.

According to the artifacts, overcoming barriers may be one of the most difficult aspects of being a hero. I believe it is the most difficult since many individuals are discouraged and simply give up. To be a successful hero, you must be a highly motivated individual. Without motivation, you will not be particularly successful since you will lack the will to make a difference in the world. Bravery is an excellent quality in a hero. I believe courage is an important attribute because you never know what lays ahead of you and you must be brave to persevere.

No matter who the hero is, whether in a poem, a movie, or even in real life, they all assist to change people’s lives in a positive way. Figures with heroic traits were extremely significant to communities not just during the Biblical era, but also in the twenty-first century, since they serve a purpose. When times are harsh and everything seems unattainable, heroes inspire us to keep believing. We get back up and continue to fight and believe in ourselves. Every hero confronts fights, some of which they may win and others which they may lose. We may learn from these losses as a society, because understanding failure allows us to aspire and evolve.

The three traits that heroes have in common at the end of their transformation are as follows:

The 1st trait is Apprehension for the Welfare of Others. Empathy and compassion for others, according to psychologists, are important factors that lead to heroic action. People who do acts of heroism care about the people around them and can feel what others in need of assistance are feeling. Heroes, role models, and leaders have the capacity to act as moral models as well as enhancers. Heroes may provide a protective function in addition to role models or leaders. Heroes are more likely than leaders or role models to aid, save, defend, make the world a better place, and do what no one else will.

2nd trait is that heroes have valuable skills and strengths. Obviously, having the necessary training or physical capacity to deal with a crisis may also play a significant part in whether or not people become heroes. People are less willing to help or choose less direct methods to intervene in circumstances where would-be rescuers lack the know-how or overwhelming physical power to make a difference. And, in many circumstances, this is arguably the ideal strategy; after all, those who rush into a dangerous situation might make rescue professionals’ jobs considerably more difficult. People who are skilled and capable, such as those who have first aid training and experience, are better prepared and capable of stepping up when their talents are required.

3rd trait is heroes aren’t afraid to face fear. A person who goes into a burning building to save another person is not just courageous; he or she also has the capacity to overcome fear. According to the researchers, heroic people are naturally positive thinkers, which helps to their capacity to see beyond the immediate danger of a situation and envisage a happier ending. In many circumstances, these people may also have a higher risk tolerance. Many compassionate and nice people may withdraw in the face of peril. Those who take action are more inclined to take more risks in other parts of their lives.

Anyone who has ever visited a hospital understands that nurses are everyday heroes. The story I am about to narrate is a story of a fellow nurse who showed an act of heroism

According to the incident, she was a trainee nurse working the night shift in the NICU, and one of my patients was a newborn delivered so preterm that we couldn’t save his life. His young mother remained stoic throughout the ordeal, and I felt powerless standing next to her, waiting for the unavoidable to occur. She informed her as she stood by this weeping mother that she wanted her baby christened before ‘he was gone.’ She dashed to the charge nurse with the request, relieved that she could finally do something. The charge nurse instructed her to contact the chaplain, who did not respond. She contacted every chaplain on the list, only to find that no one was available in the middle of the night. When she returned to the charge nurse with the news, she said something that has stuck with her ever since: ‘I assume you’re going to have to do it since you’re the nurse.’ Charge Nurse must have expected her to request another nurse or a respiratory therapist—someone, anybody, more suited to baptize a dying child than she was. So, she went back to meet the mother and told her that, although she couldn’t find a chaplain, she would baptize her child if that was okay with her. She carried the newborn in one hand and a little baby bottle of sterilized water in the other. Then she sprinkled some water on the dying baby, cleaned him up, and returned him to his mother. The mother cradled the infant for a few moments before placing him back on the bed. Then she sobbed and hugged the nurse. She, too, embraced her back and sobbed. That’s when I realized what it meant to be ‘the nurse.’

After analyzing the heroic qualities in the story and comparing it to my own culture, I think that compassion, courage and determination are the common qualities that both cultures have. A nurse who hears gunshots coming from the triage area in the ED and rushes in as everyone else flees. A nurse who returns to his dying patient’s room after his shift has ended so that he does not die alone. A nurse who, despite having been tormented as a new nurse, goes out of her way to ensure that no new nurse is ever abused again. These are the nursing heroes we honor during Nurses Week. The good news is that they are ubiquitous and frequently go unnoticed. Why? They are heroes because it is who they are. Nursing is a vocation for them, not a job.

Nurse heroes discover new methods to exhibit compassion in each new contact. It’s not always simple, and it sometimes requires a lot of compartmentalization, but compassionate nurses play a key role in generating the finest patient experiences. Nurse heroes think on circumstances and find new methods to deal with them in the future. They also make time to improve their moral fortitude. Nurse heroes take their work seriously and take full responsibility for how they carry out their responsibilities as nurses. They continuously find methods to reflect on events and discover new strategies to deal with future interactions. Nursing is a valiant profession. The nursing heroes who stroll the corridors of healthcare facilities contribute to the finest possible patient experience.

1st main takeaway from the culture reflected is that size doesn’t matter in case of heroism. There will be large problems, small challenges, microscopic challenges, and gigantic challenges throughout life. However, the scale of the difficulty, issue, or hurdle is unimportant. You may apply the same approach and degree of thought to your life and the issues you face. Think greater than the problem, be bigger than the hurdle, and behave as if not failing is impossible. Have self-assurance, conviction, and believe in yourself MORE than you feel the task is too difficult to overcome. you, what you are thinking, and your convictions are the only things that decide what is possible for you. If stature had been a factor for David (as it was for the Israelites), he would not have had the guts to face Goliath. Especially with only a stick, 5 stones, and a sling at their disposal.

2nd main takeaway from the culture reflected is that don’t underestimate your competences. It’s never a good idea to underestimate oneself. When you undervalue yourself and your ability, you end up doing less. He was astute enough to recognize that he was more than capable of success. Stop undervaluing yourself. It makes no difference. If you’re a writer, a pianist, a plumber, a real estate broker, a personal trainer, a musician, a parent, or a college student, you haven’t seen it yet because you haven’t given yourself the opportunity. If anything, you should overestimate since you’ll wind up giving and doing more than planned, achieving more and attaining your full potential in the process.